The air hockey table has powerful zero gravity sports motor provides puck float. It comes ready to play with two pushers and two pucks. The air hockey table has slanted leg design for intense action. This Zero Gravity Sports Air Hockey Table from Franklin Sports has high gloss play surface that is designed for competitive play. Air hockey tables crafted with deep inner rails help the puck stay on the table for you and your opponent's safety. Puck returns allow you to easily access the puck after each goal, and leg levelers offer stability on uneven surfaces and carpeted areas. An air hockey table will bring hours of entertainment and is a great way to host a friendly challenge with your family or friends. The simple rules, quick gameplay, and skill challenges make this a popular arcade-style game.

Air hockey is a fast-paced table game often seen in the company of other family-friendly games such as ping-pong, foosball and bumper pool. A typical air hockey table for casual use consists of a 6' by 4' (1.8288 x 1.2192 meters) playing surface suspended approximately waist-high from the floor. The smooth top is perforated with hundreds of small holes which allow generated air to flow through. The playing field is often decorated with red and blue lines similar to those found in ice hockey.

The purpose of the air cushion is to suspend a round plastic puck slightly above the playing surface. Some less expensive models sold as air hockey tables do not feature this cushion of air, relying more on the slickness of the surface itself. The air hockey table is also designed with side rails to keep the puck in play and provide banking for trick shots. Much of the game play in air hockey relies on deception and misdirection, so bank shots and rail shots are very important to master. 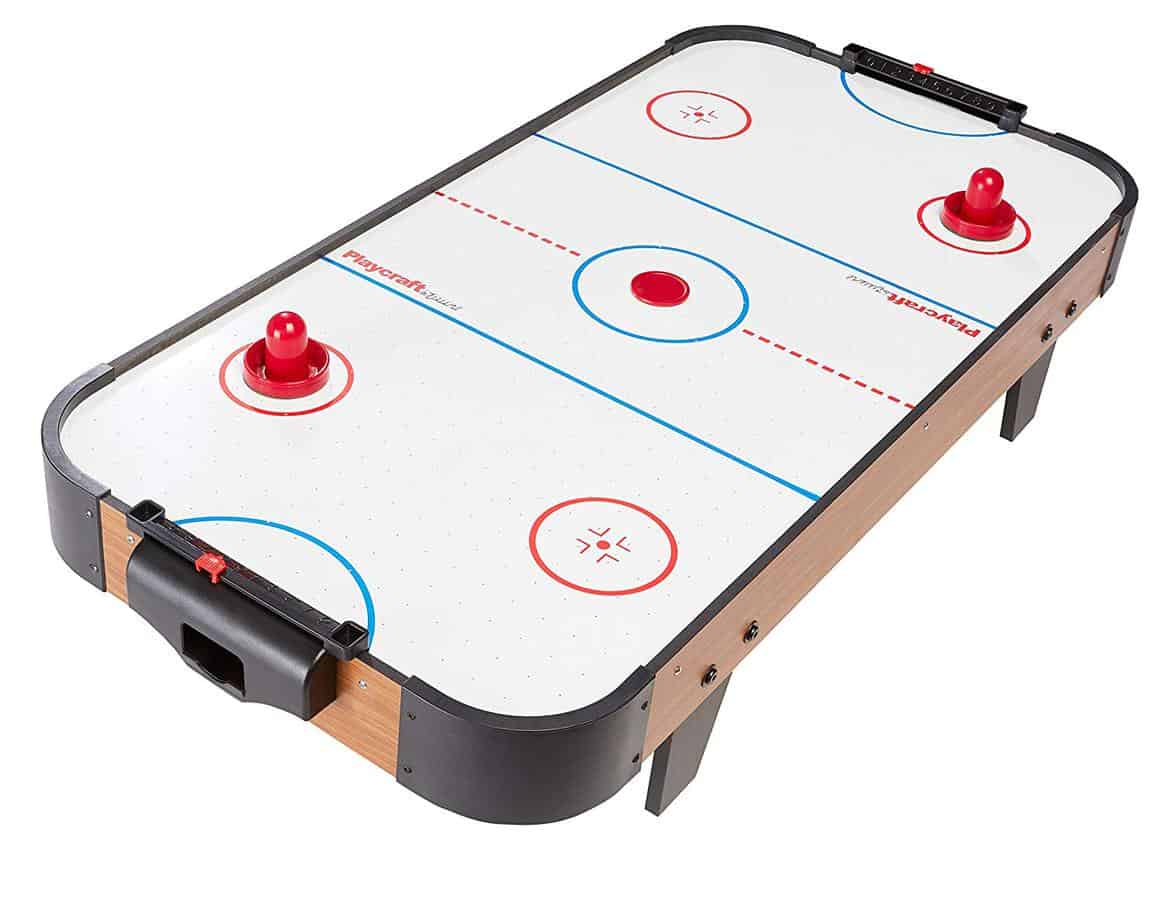 There are two slots on either end of the air hockey table which are the equivalent of hockey goals. The objective of the game is to use a special striker called a mallet or paddle to force the puck into the opponent's goal. The first player to score a designated number of goals is declared the winner. In tournament play the winning score is 7, but amateur players can set any number as a winning score.

To begin a game of air hockey, one player is designated as the server. The puck is placed on his or her side of the table and the other player must anticipate the serve. Once the puck crosses the center line, it can be returned by the receiving player.

Players can only use their mallets to strike the puck, not to trap it. This would be considered a foul and the other player would receive the puck. Air hockey players cannot block shots with other parts of their bodies and have only 7 seconds to strike the puck once it reaches their side.

The most common strategy in air hockey is to establish a repetitive pattern and wait for the opponent to pull him or herself out of position. A direct shot to the goal is usually successful. Other playing strategies include angling the puck to hit the corners of the goal or changing the pace to misdirect the opponent. A basic defense is to keep the mallet 6 to 8 inches (about 15-20 cm) in front of the goal to block straight shots, then pull the mallet back to each corner to defend angled shots.

There are actually professional air hockey tournaments sanctioned by an official air hockey association. Tournament air hockey tables are larger and longer than those found in arcades and homes, and the players use more elaborate patterns to distract their opponents.