The playoffs will continue to use the existing multi-round elimination format; playoff points will be carried over through all but the final race of the season. With playoff points being awarded after each segment I'd expect a lot more short pitting or lower funded teams taking risks to get those points for Top 10 finishes. The changes could be a total failure and NASCAR could just revert back in a couple seasons but I expect to see some major benefits starting with this weekend. The remaining four drivers will have their points and playoff points reset to 5,000 for the final race. Kyle Busch, 5,000 points; Kevin Harvick, 5,000 points; Martin Truex Jr., 5,000 points; Brad Keselowski, 5,000 points; 2017 NASCAR championship race rules. Just like the other 35 races, there will be stage racing at Homestead next Sunday.

We will hold a total of seven drafts through out the course of the season.

The first draft will be held before the start of the season in early February. Each team will draft one driver each. The driver you draft you will keep through the first five races of the season.

Third Draft before Race # 11 (drafting only one car) 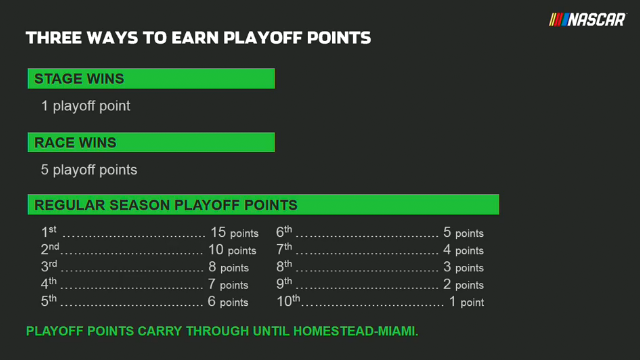 Fourth Draft before Race # 16 (drafting only one car)

Fifth Draft before Race # 21 (drafting only one car)

Sixth Draft before Race # 26 (drafting only one car)

* Race #31 through race # 36 is the last 6 races of the year and our chase to our Fantasy League Championship! (Playoff Teams)

At each draft every team will only pick one driver. (This is your Lock driver) If the same driver is available when it's your turn to draft you can draft the driver back, if you choose to do so.

The driver you draft in each of the seven drafts will be your driver to obtain points from during the regular season and or playoffs.

With the exception of the first draft of the year held in February at pre-season meeting, the other six drafts will be conducted by phone on Mondays & Tuesdays. To avoid any confusion on who has been drafted please DO NOT ASSUME who has been drafted until you have heard from the Race Official him self. The Race Official will let you know who was drafted either by phone or Email in the order the drivers were picked.

- Picking up your Second & Third Starter or O.T. driver - 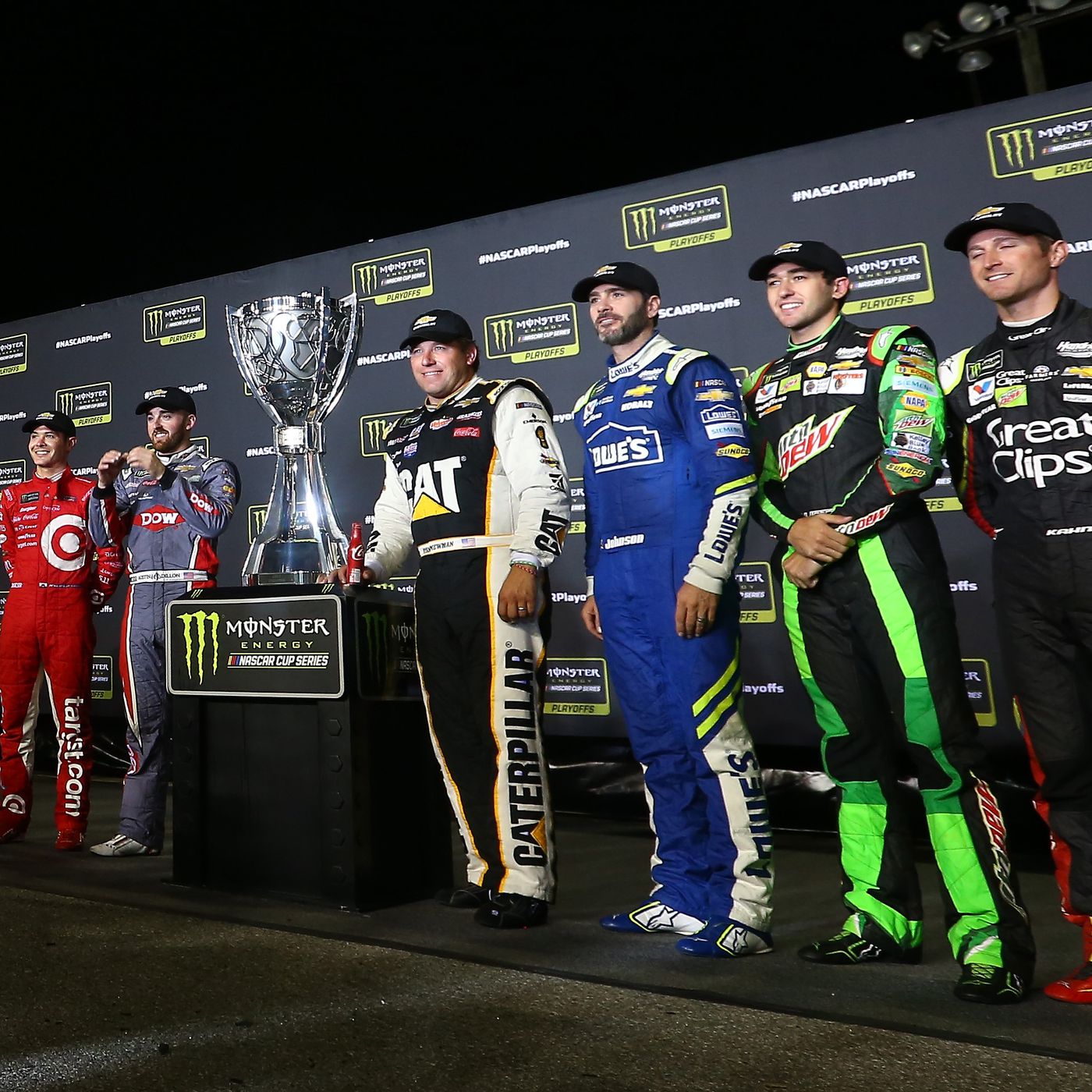 To finish out your team each week, every team will be required to choose a second and third starter (races 1 – 20) or overtime driver (races 21 – 30) from the remaining field of drivers not taken in the drafts.

For example if you draft Tony Stewart as your Lock Driver for the first five races of the year, you get all the points Tony creates for you during those five races. No other Team during that five-race stretch can choose Tony as their second or third starter or O.T. driver during that time.

This means with each week's race you will be forced to choose a different second & third starter or overtime driver during each five-race period. The only driver you are allowed to use week after week is the driver you drafted. This also means the same driver could be picked by multiple teams as either a second or third starter or overtime driver for the same race. So if you've picked Mark Martin as your second starter for the 500 other teams may choose him as their third starter or also as a second starter as well, but no matter what another team may use him as they to will not be able to choose him again until the Martinsville race.

After each five- race period is complete the process starts over again for every Team. Some thinking and strategy will be needed to get through the season.

Each Team will be responsible for making sure they turn in their picks each week by Wednesday night at midnight. The Race Official will send out a reminder on Tuesday night. Any Team or Teams who do not send in their picks by Wednesday night at midnight will get one more Email early Thursday morning. If any Team or Teams still have not sent their picks in by midnight on Thursday will be out of luck and will only receive points from their Lock Driver for that weeks race.

(Calling and leaving a voice mail message for the Race Official will also work if you can’t get to a computer.)

The Kansas NASCAR Fantasy League runs on its own scoring system. Your Lock Driver, second & third starters or Overtime Drivers earn points based on where that particular driver finishes in that week’s race according to NASCAR.

For our League a first place finish in a race will earn you a total of 80 points and a 43rd place finish will get you only 8 points.

Qualify on the Pole – 5 points

Win from the Pole – 5 points

Lead the most Laps – 5 points

The 5 Bonus Points for qualifying on the Pole will NOT be given out for those races when NASCAR sets the field by Point Standings due to a rain out and no qualifying takes place.

You can still earn the 5 points if that driver wins from the poll. If this happens during the year a point total of 95 points will be the maximum possible for a driver.

Any Team or Teams who has its Lock Driver, 2nd Starter, 3rd Starter or Overtime driver win the actual NASCAR race will earn 5 Points for that particular driver. Those 5 points earned will NOT be added to your Team Points or Overtime points.

The 5 points earned will instead be added up through out the Regular Season (30 Races) seperatly .

A maximum of 150 Points could be earned by the end of the Regular Season. (30 Races)

These points earned will have an impact for those Teams who make the Playoffs.

The League will be divided up into to two divisions of six teams each. Teams will be placed in either the Automatic or Manual Divisions at the February draft by a blind draw held after the first draft of the year.

All Teams will earn Team Points with a total of three drivers each week. Their first starter is their Lock Driver or the driver they drafted. They will then choose a 2nd starter and a 3rd starter each week from the remaining pool of NASCAR drivers not taken in the drafts. Once you have chosen a driver for your second or third starter you cannot choose him again or any other Team’s Lock Driver during that five-race period.

The driver you choose as your third starter will help determine the placement with in your division in case of ties in Team Points between two or three Teams. May not sound like a big deal, but it could be the difference when it comes to your drafting order at the end of every five races.

All Teams will earn Points with a total of three drivers each week. Their first starter is their Lock Driver or the driver they drafted. They will then choose a 2nd starter each week from the remaining pool of NASCAR drivers not taken in the draft. The points earned from your two starters will go towards your Team Points. The third driver you choose will be your Overtime Driver also picked from the remaining pool of drivers. The Overtime driver during the last 10 races of the Leagues regular season will serve two purposes.

The first 30 races are considered the Leagues regular season.

The two Teams who finish in 1st and 2nd at the conclusion of the 30th race will automatically qualify for the Playoffs.

The Team with the most Overtime Points of the remaining Four Teams will also qualify for the Playoffs as the Automatic's Division Wild Card team.

The two Teams who finish in 1st and 2nd at the conclusion of the 30th race will automatically qualify for the Playoffs.

The Team with the most Overtime Points of the remaining Four Teams will also qualify for the Playoffs as the Manual Division Wild Card team.