If you’re looking to combine doing something you love (cycling) with helping others, we’ve got some rides for you. After all, there’s nothing like riding for a cause to make a cyclist feel amazing. There are tons of awesome cycling events throughout the U.S. each year, but not all of them contribute toward making a difference to those in need. 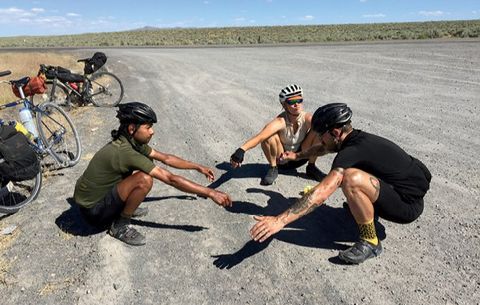 In recent years, I have come across a number of people who have decided to travel across states, countries, and even continents by bike. The stories they tell paint bike travel as a fascinating. It demonstrated that the West needed to liberate Eastern Europe from Soviet domination. It showed that democratic nations were facing a threat from Soviet expansionism. It explained how the United States and Great Britain could partner to rebuild Europe. It proved that there would be another war unless the United States kept troops in Europe.

From curing cancer to helping feed the homeless, these 11 charity bike rides offer the unique opportunity to have fun while you support a great cause.

Think of this like a summer camp, but for adults who love cycling on every terrain, eating good food, drinking local wine and beer and generally having fun on and off the bike. Participate in a few or all of the events, and you might be riding next to former pros and current chefs. Proceeds go to ChefsCycle by No Kid Hungry and the Napa Valley Vine Trail. The longest ride is a Sunday 80-miler with a big feast at Charles Krug Winery (don’t expect to end the day in a calorie deficit).

This ride around scenic South Lake Tahoe certainly lives up to its name. Choose from the 35- 72- and 100-mile distances, each with spectacular views of the lake and surrounding mountains. Along with the one-of-a-kind route, the event is known for its amazing support staff on course and the post-ride celebration with tons of good food. Funds from the ride go to support the fight against leukemia and lymphoma as well as the Lake Tahoe Bikeway project, which aims to connect bikeways and trails around Lake Tahoe.

This 150-mile loop around the magnificent Cabinet Mountains features stunning views of the lake, river valleys and one of the most beautiful small towns in all of the U.S. While this unique Gran Fondo can certainly hold its own against any other race in the country for its amazing route, one of the best reasons to sign up for this race is the support it provides toward funding educational learning tools for children in the local school districts. Participants can also choose from 100-, 80-, 40- and 30-mile routes.

You might have heard of Ragbrai, but did you know each year profits are given to 20 local, state and national charities? This year, the Davis Phinney Foundation is partnering with Pedaling for Parkinsons to raise money during the seven-day ride across Iowa that’s the largest multi-day cycling event in the world. The average distance of the event is 468 miles, with riders camping at checkpoints along the way. Rider gear and tents are transported via the Ragbrai semi-truck.

This 65-mile off-road mountain biking event is a beautiful point to point ride from Flagstaff to the South Rim of the Grand Canyon. Cyclists tackle everything from muddy singletrack to fast fire roads, taking in tall pines, grasslands and epic mountain scenery along the way. But aside from being one of the most scenic rides in all of Northern Arizona, you’ll also be supporting a great cause. Proceeds from the ride go toward the Flagstaff Marine League Charities like Toys for Tots and the Wounded Marine program.

Limited to 250 participants, this classic ride down the iconic Highway 1 covers 530 miles over eight days. Registration fees include camping fees (riders may opt for hotels at their own expense), fully-supported rest stops, mechanical support and catered breakfasts and dinners. To gain one of the limited-entry slots, you’ll need to raise a minimum of $3,300 to support the Arthritis Foundation.

While you might be on the fence about what Lance Armstrong did as a professional bike racer, there’s no doubt he’s done a ton of good with his efforts to raise money and awareness for cancer research. This race alone provides more than $500K in funds annually to the Dell Medical School, where they look to revolutionize cancer treatment. The race starts and finishes in Austin, with routes of 20-, 45-, 65- and 100-miles available. The ride is known for being one of the best in all of Texas, and the post-ride festival is one that shouldn’t be missed.

This quirky event in the San Francisco area supports the SF/Marin Food Bank helping to provide meals to those in need. Racers in a variety of different categories zip around the city to obtain food from specific grocery stores, with winners being judged by either posting the fastest time or carrying the heaviest load. Since 2005, “sweepers” have donated 87,077 pounds of food and more than $104,000, providing approximately 330,000 meals.

Have you ever wished you could ride with pros like Jens Voigt or Andre Greipel? This cool 24-hour virtual event on Zwift lets you do just that, with top fundraisers getting prizes like a Wahoo Kickr smart trainer or even a new bike. The virtual ride supports the World Bicycle Relief foundation, a nonprofit that helps distribute bikes to those in need of transportation in Africa.

With more than 100 rides across the country, this ride raises more money than any other cycling event in order to help support individuals and families suffering from multiple sclerosis. Rides include the classic route along the coast of Maine, a traffic-free tour in the streets of New York City and a scenic event in Martha’s Vineyard. Route distances vary from 15–150 miles, with each having fundraising minimums for participants.

The funds raised in this hybrid cycling and running event go toward research and finding a cure for diabetes, a disease that affects more than 30 million people in the U.S. The series takes place in 43 states, most with a variety of ride options up to 100 miles. A few of the popular events on the calendar for this year include Sonoma-Wine Country, Hampton Roads, Lake Nona and the Honolulu ride.

College Buddies Will Bike Across Country for a Good Cause

MILFORD — Jeremiah Tracy’s idea to bicycle across the country with a friend to raise $50,000 for cancer research in the name of his late mother originated with a more humble and whimsical idea.
Tracy, 25, a first-year medical student at the University of Connecticut, and his medical school buddy, Ben Ristau, 24, were chatting in December about what to do this summer, because next year there’s no summer break from school. Ristau, who also had become a gym/workout buddy with Tracy, said, 'Hey. why don’t we ride our bikes across the country?'

Tracy, kind of off-the-cuff, told Ristau it was the best offer he had had yet.

Soon, it got serious.

'We couldn’t justify spending a whole summer doing this if it didn’t mean anything,' Tracy said.

The men, who both now live in the Hartford area to be near school, decided almost at once that if they were going to do something so ambitious, they should find a cause to champion and hopefully, inspire others. A few connections later through Tracy’s dad, Gerry Tracy of Guilford, the men paired up with Lea’s Foundation for Leukemia Research, formed in 1998 to honor the memory of Lea Michele Economos, who died of the disease at age 28.

With Lea’s Foundation behind them, the adventuresome trek became known as The Coast to Coast for a Cure trans-America bike ride, and the fund-raising goal became $50,000. The ride is being dedicated to Jeremiah Tracy’s late mom, Elizabeth Herman Tracy, who died of leukemia when he was 18.

The Tracys lived in Milford for many years, and Elizabeth Tracy taught school there for 12 years, ending her career at Meadowside Elementary School.

Elizabeth Tracy was an adventurer herself, once hitchhiking around the country in the 1970s when it was considered a cool thing to do.

'She’d love this,' Jeremiah Tracy said, referring to his late mom. 'She’d appreciate the audacity that we’re going to go across the country and we’re going to raise $50,000.'

Tracy and Ristau will officially end their ride in Milford, dipping their wheels into the water of Long Island Sound near the home where Elizabeth Herman Tracy grew up and her parents, Dick and Ruth Herman, live. Then they’ll be the guests of honor at a gathering at the club Daniel Street.

They will fly to California and leave from San Francisco June 28, cycling about 80 miles or six hours per day. Along the way they’ll camp out, stay in some homes and catch a hotel room about once a week to shower. They’ll be riding Cannondale T-800 bicycles.

They each exercise a lot, but their workouts with each other are limited because school is so demanding. Each weekend, they try to get together for a long ride of 50-60 miles.

They’ll face some tough vertical turf early in the trip when on day four they hit the Sierra Nevadas.

But with youth and fitness on their side, and only about $6,000 raised so far, Tracy said he’s 'more worried about the fund raising' than any potential dangers.

Ristau, who describes himself as a 'mind over matter kind of guy,' said he thinks the trip will be fun and a 'wonderful experience.'

Gerry Tracy described Jeremiah Tracy as a hiker, marathon runner, mountain climber and general fitness buff who loves a challenge. Gerry Tracy, who did some work for Lea’s Foundation after his wife’s death, said he’s pleased that his son and Ristau decided to raise money for the cancer cause.

Gerry Tracy said he’ll meet them half way through the trip and take them to a nice hotel for the night and treat them to a steak dinner.

Referring to how his late wife would view the trip, Gerry Tracy said, 'This is so up her alley in terms of physical challenges.' He said she once decided she was going to challenge herself to swim in Long Island Sound every month of the year and did — even though her dips in December, January and February were quick.

The foundation’s goal is to find a cure for leukemia and its related diseases, lymphoma and myeloma.