Austin High senior running back Cortez Shackleford couldn't help but bury his face into his hands, and teammate Cornelius Jenkins knelt to contain himself surrounded by teammates midfield.

For the Black Bears, tears of joy streamed down their cheeks as they beat their crosstown rival 17-14 for their first victory in the annual series since 2001.

Senior place-kicker Morgan Hull hit a 36-yard field goal with 3:05 left in the game for the winning margin, the last of 17 unanswered points for the winners.

'What better way to end your season than with a win in a huge rivalry game?' Austin coach David Norwood asked. 'Coach (Jere) Adcock and their entire coaching staff, they had a great game plan. It just went our way this year, that's all.'

In the season finale for both teams, Decatur and Austin each finished 4-6.

'We got ahead, but they didn't give up, and I thought it said a lot for their kids and their coaching staff,' Decatur coach Jere Adcock said. 'Both teams didn't quit playing hard all night.'

Austin fumbled three times in the first quarter, two of which resulted in Decatur touchdowns to give the Red Raiders a 14-0 lead.

The Black Bears fumbled a punt return, giving the Red Raiders the ball on the 9-yard line three minutes into the game.

Decatur found itself first-and-goal again when Austin fumbled on the 8-yard line with 2:55 to go in the first period. 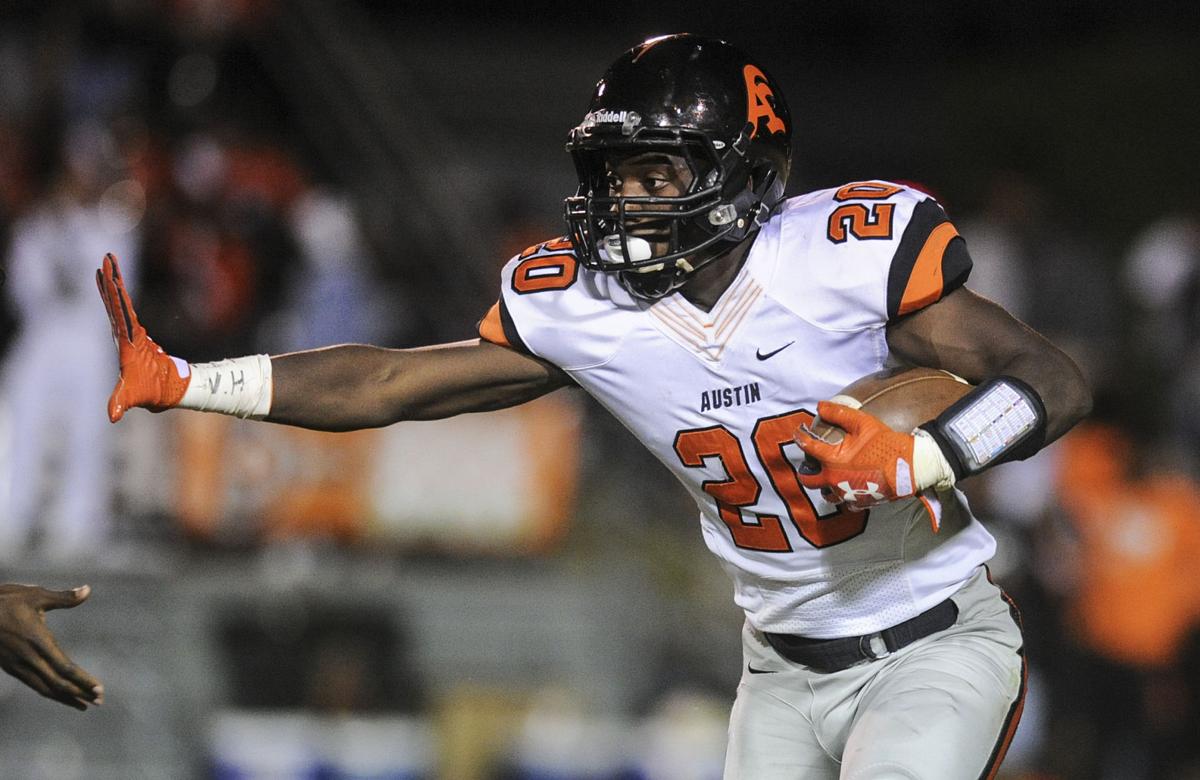 Looking for a spark, Austin senior T.T. Martin's 25-yard fumble return was the momentum swing the Black Bears were looking for, pulling Austin within 14-7 midway through the second and the score stood at halftime.

'Thanks to the defensive linemen, me and Ty (Chancelor) had good reads,' Martin said. 'We had to find a way to win and we did.'

Austin used sophomore running back D'Nico Best and junior T.T. Mallard as its primary offensive weapons, but the pass paid dividends as well.

Sophomore Verkeneo Mann's 21-yard touchdown catch from sophomore Justin Jones tied the score at 14-14 with 3:17 left in the third.

'I thought we had a good defensive game plan. We put them in the situations we wanted to put them in and they answered the bell,' Adcock said.

Hull's field goal in the fourth proved to be the game winner and gave a hyped Austin crowd reason to rush the field.

The win was particularly sweet for Hull and his senior teammates, who beat Decatur for the first time in their final try.

'I talked to the guys and told them, 'We've got to have this,' ' Hull said. 'We haven't done this in the three years I've been here and this makes it. It really gives us a boost.'

Norwood said many of those seniors had one of their best games this season, including Chancelor, a senior linebacker.

'We had nothing to lose,' Chancelor said. 'We fought to the end and we never gave up. This is great, it being our last year and all. It couldn't be better.'

Save $84.50 a year off our newsstand price:
Subscribe today for only 38 cents a day!