The Impossible Quiz is back! Good luck! Impossible Quiz Book is here, and it's the hardest one yet! Seriously, I couldn't even get past the 5th question! Answer a series of ridiculously tricky questions. Get a wrong answer and lose a life. Lose all of your lives and it's back to the beginning! Do you think you're witty enough to solve this challenging game?

Follow on screen instructions
The Impossible Quiz Book is an online puzzle game developed by Splap Me Do, and has been played 105073 times on Bubblebox.com.
% of people have voted thumbs up 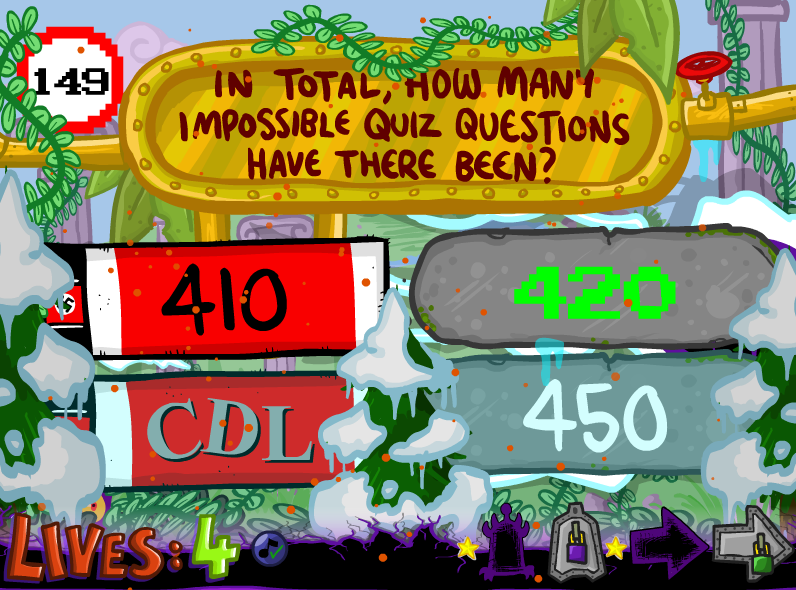 86. Move the mines around the center until they fall off, then click the center; a Fusestopper is heavily recommended (from the Splapp's flash 'The Orbinauts') (10)
87. 42 (answer to life, universe, and everything. While the question number is the correct result to the addition, clicking it makes you lose one life)
88. Pressing the right armpit gives the Giant Enemy Crab massive damage. (reference to The Giant Enemy Crab meme) (10)
89. Say 'GAH'! (referring to Sonic, which was created by Sega, therefore 'Say gah')
90. Choose 'Fight!'. In-battle, if your enemy is an Eye-on-legs, attack with either 'Scratch' twice or 'Poke' twice. If it's Bacon, attack with 'Bite' twice. After the Phlovomite is defeated, he'll either find a Fez or say 'I hate you, little ginger bum-hole'. A big 9 fills the screen briefly.
91. Pull the question over (look at the bottom right corner of the question!)
92. Second burger from the right, top row (do a barrel roll) (10)
93. She is your bionic arm! (reference to Bionic Commando)
94. Click X on all the pop-ups, until you get one about dirty pics and yiffing. Once you get that pop-up, click on 'CLICK HERE!!!'.
95. I was saving it for question 95.
96. Press X until a guy with a balloon will come, being smashed by a car (reference to Heavy Rain for the PS3; during the intro of this chapter, it says at the bottom left corner 'PRESS X TO JASON').
97. Floater (A lemming who uses in a toilet) (12)
98. Mash to fix the bottom left one, then click 'Amber lamps' (A pun on Ambulance and 999 is the emergency number in London; the other possible answers are Lara Croft, Master Chief and Kevin Butler).
99. Yellow, yellow, red, yellow, blue, pink (rhythm of happy birthday). After the loco rocos are clicked, an empty plate falls in with a little card that reads 'The cake is a LIE'. (meme from Portal)

100. The password is 5719 (each of the numbers comes from the aftermath of the updates and the battle in Q90; misclick once and the bomb will go off instantaneously!) (10)